Shifting Perspectives is a weekly conversation with Yolande. Yolande, a Canadian of Caribbean descent, now calls the Turks and Caicos Islands home. This  podcast challenges women to fuel themselves with diversity in the way they think, the way they work, the way they parent and the way they live their lives.

Episode 32: Passion with Integrity
This week I am joined by the founder of the award-winning salon, Hill Studio. Allison is a creator and a curator that has cultivated a unique space for women of color to connect and nurture not only their hair, but their community and their growth. Allison is driven by passion and community. She feels as though we are all given a gift and a direction and that it's important for us to spend the time that we have pursuing those gifts and passions. Like many of us in this period, Allison has had to take pause herself, and walks us through her own required navigation. In doing so, she reminds us  of the power of having clarity on the true essence of our work or passion. This clarity then opens the door to the alignment of our energy and our spirit, which makes it easier to evaluate and navigate the pivots we need to make. ​ 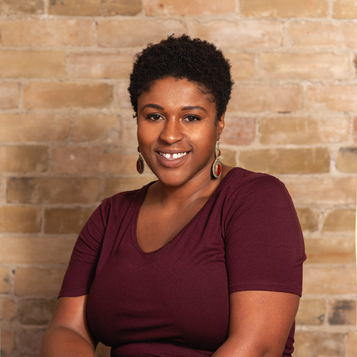 Founder of the award-winning salon, Hill Studio. A leader in afro textures in Toronto, Canada. Creator and Curator of Hill Insider. An initiative to mobilize her community to create space for WOC in wellness.
Allison began her journey towards her purpose with a small seed planted by her late Mother Gladys ‘Hill’ Griffin.

“I would spend hours with my mom doing her hair.” Her mother would share stories of her childhood, her dreams and aspirations. This is where Allison began to understand the powerful bonds that are established between women. Her mother taught her not to lock herself into the expectations of others. To live a genuine life, that real wealth is in community, health and family.

“As far back as I can remember, I’ve always been doing hair but those experiences gave purpose to my passion.” Allison also credits her father for her determination and work ethic. Quartus Griffin was the owner of a thriving business that exposed Allison to entrepreneurship from a very young age. As a first generation Canadian to immigrant parents education was non-negotiable.  Allison would go on to earn a Business degree from Oakwood University an HBCU. Being educated among black students, by black educators opened her eyes in empowering ways. It gave her new perspective on what was possible and what she could offer as black female professional.

“Through examples, I began to see the impact that I could have on my community, it encouraged me to drive towards creating it.” After University she landed a well paid job in Healthcare Administration. “It felt like the safe thing to do, but it was truly my mother who encourage me to do the brave thing. Allison would eventually quit that job and finally pursue her career as a Hairstylist. Shortly after taking the most daunting leap of her life, Allison lost her Mother abruptly to a brain aneurism.

With the weight and fuel of her mother’s passing, Allison began her journey to create spaces where she could recreate the warmth, encouragement and safety she shared with her mother through the medium of hair.

But she did not stop there, to gain a broader knowledge of her craft she travelled around the world, New York, Atlanta, Paris, London learning from the best in her industry to fill in the gaps in Afro texture education left from that of traditional hair schools.

After years of building her clientele, in 2016 Allison founded Hill Studio. 3 short years later Hill Studio was recognized as “The 2019 People’s Choice Salon” by ByBlacks.  As Hill Studio grew in reach and notoriety Allison decided to take her vision a step further and to create a community space; Hill Insider.
Hill Insider is an initiative created to curate unique wellness activations, experiences and programming for women of colour to build themselves, build others, and build community.
​
“After 10 years of working in this industry I know that women don’t just go to the salon to get their hair done. They go for the sense of community, they go to feel well. That’s what Hill Studio, and now Hill Insider does for us.” Allison is constantly inspired by, her late mother Gladys ‘Hill’ who worked every day to create a better future for her.  Allison believes that it is her responsibility to continue this legacy, through hair, Hill Studio and Hill Insider.